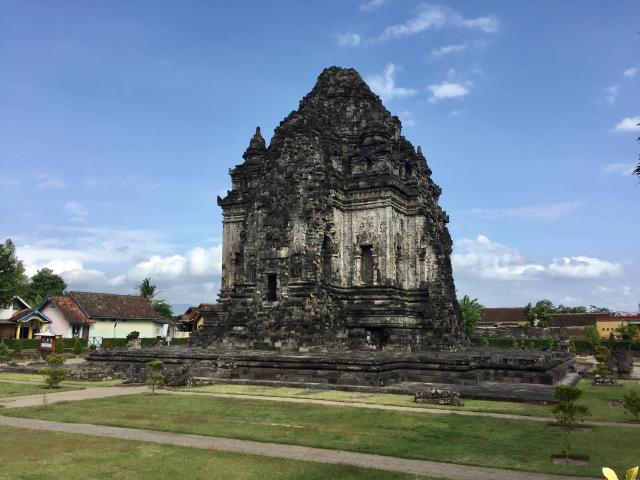 Kalasan temple lies in Kalibening village, Tirtamani, Sleman, Yogyakarta. In Kalasan inscription said, that the temple is also called Kalibening, caused by the temple lies in Kalibening village. There is another temple named Sari temple, which is not too far from Kalasan temple. Both temples are similar beauty and subtlety sculptures building. Another distinctive feature observed in the second temple was used to coat Vajralepa ornaments and reliefs on the exterior walls.

Generally, the temple was built by the king in his time for various purposes of worship, a residence for monks, the royal center where operations or religious teaching. The information about Kalasan loaded inscription was written in 778 AD. The inscription is written in Sanskrit and uses letters of Pranagari. In Kalasan temple inscription explained, that religious advisor has suggested that the Syailendra dynasty Maharaja Tejapurnama Panangkarana sacred building to worship Goddess Tara and monastery for Buddhist monks. According to King Balitung's inscription, Tejapurnama Panangkarana Rakai Panangkaran is none other than King Sanjaya' son of Mataram Hindus Kingdom.

Rakai Panangkaran later became the second Mataram Hindus king. During the period 750 to 850 AD the northern region of Central Java was ruled by kings of the Sanjaya dynasty of Hindu God Shiva and worshiped. This is evident from the character of the temple that was built in this area. During the same period also, the Wangsa dynasty Buddhist Mahayana already leaning Tantryana flow and power in the southern part of Central Java. The division of power influences the nature of the temple that was built in their respective areas at the time. Both dynasties were eventually incorporated by marriage Rakai Pikatan (838-851 AD) with Pramodawardhani, a crown of the prince Maharaja Samarattungga dynasty.