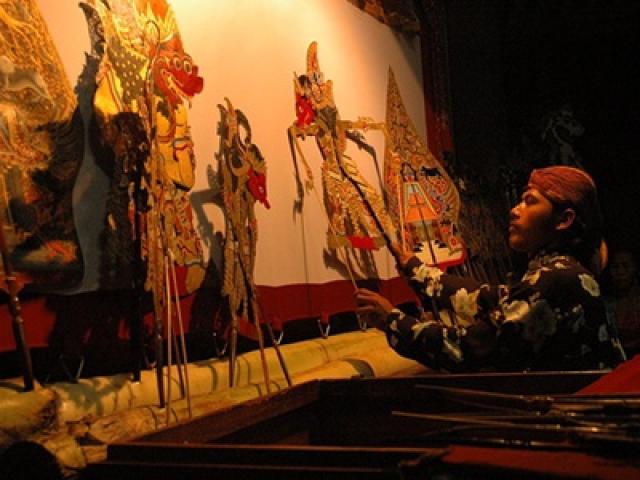 Puppet shadow show is always accompanied by a set of Gamelan music and clanging tools or fiddle. Art famed shadow puppets more than 1000 years before in the Middle East and Southeast Asia. In Malaysia there are several types including shadow puppets Malay, Kelantan puppet, Javanese puppet, Purwo puppet, which there are differences in each type of shadow puppets is the mainly of story and character.

Communications tool
In principle, all types of leather puppets are in Malaysia has an effect of Java or Southern Thailand Pattani, but the development is causing shadow puppets changes and adjustments follow the reception and the local community context. The case holds a shadow puppet fist communication tool in addition to the public art proposal. The flow of the story and character sculptures still showed the originality and influence of origin but on scenes antics that are often located along with the shadow puppet story, only terms of language elements and events described. Therefore, shadow puppets are enjoyed in two places and both have an important role.

Accompaniment
The shadow puppet offers music, conversation, and movement. Normally during the sculptures carry all the music stopped. During the sculptures speak little movement should be done through the movement of the hand joints are talking statue. Conversely, if the puppet statue was moved in the course of the storyline, the musical accompaniment immediately helps foster the atmosphere of the movement. Dalang is the most important person in the performing arts and his offerings shadow puppets. He sat behind the stage curtain, moving the character puppets and give voice to different sound patterns to follow the playable character. The show helped mastermind Handyman provides puppet character-based storyline that would be submitted by the puppeteer. Kasah wood is a type of instrument used to produce impression sounds during fight scenes. The puppet sculpture stands up on the banana trunk and character will be generated from the light.