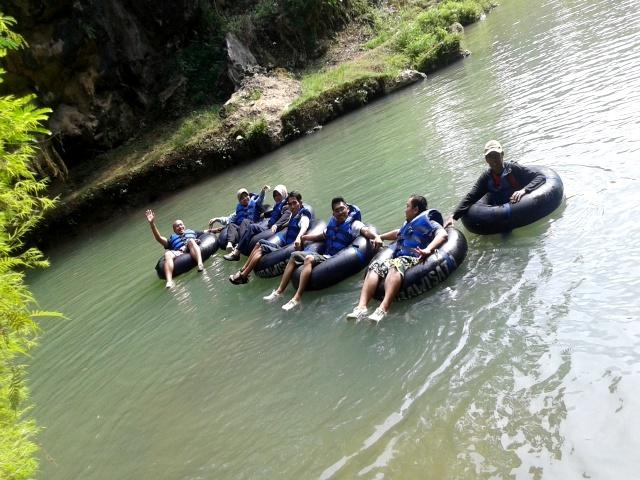 Pindul cave is located in Bejiharjo village, Karangmojo, Gunungkidul, Yogyakarta. The cave was introduced in the late year of 2010. Pindul's name comes from a story of a young man named Singlulung, he was looking for the missing father. He was down a lot of forests and caves, but when he was in the cave and his head hit a rock, and eventually this cave called Pindul cave. Pindul name is an abbreviation the word of Pipi Kejendul meaning cheek bumped.

Pindul cave has a unique beauty, because it has a lot of sparkle stalactite and stalagmite that is thousands of years old and white crystals in various corners of the cave. There is also stalactite when struck will produce sound like a gong and the voice reflected off the walls of the cave formations. There is also a fairly large room with a hole in it and that is in the middle of the cave. The atmosphere in Pindul cave becomes more exotic with the sunlight coming through into a hole of the cave.

Visitors can go through the river along 300 meters heading into the bowels of the cave by using car tires as a floater. It is called cave tubing and is usually performed for approximately 60 minutes. The river flows in Pindul cave tend to calm, so it is good for children as well. During the trip down to the river, it will be treated to some of the paintings created by experienced bat cave dwellers. Also will receive an explanation about the ornament, rock crystal along the way cave tubing journey.