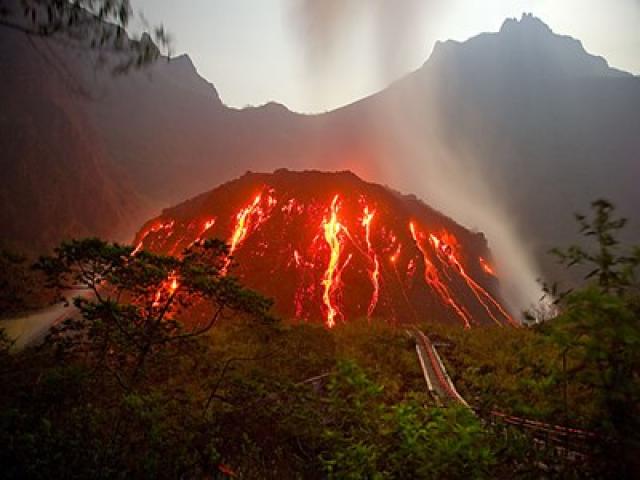 Mount Kelud is one of the active volcanoes in East Java. Mount Kelud is on the border between Kediri and Blitar, about 27 kilometers east part of Kediri town. Since the 15th century, Mount Kelud has claimed more than 15.000 people's lives. The eruption of Mount Kelud was in 1586 to take toll of about 10.000 lives. A system to divert the lava flow had been built in 1926 and is still functioning today.

In the 20th century, recorded mount Kelud erupted in 1901, 1919, 1951, 1966, and 1990, and in 2007 it again increased volcanic activity. The Mount Kelud activity increased in late September 2007 and continued until November of the same year. It was on the mark with the water temperature rising crater, increase in seismic tremor, and changes color from green to white lake turbid. Status "alert" issued by the Center for Volcanologist and Geological Hazard Mitigation, beginning on October 16 ‘2007 the population within a radius of 10 kilometers from the mountain evacuated.

Due to the high activity of these symptoms occur uniquely in the history of mount Kelud with the advent of white smoke from the middle of the lake and follow the lava dome in the middle crater lake since November 5 ‘2007. It was continued to grow until measuring 100 meters wide. Experts consider lava dome is clogging of magma that no eruption is imminent. The energy was used to promote eruption lava dome eruption remainder of 1990. Since the activity decreases and the energy release on November 8' 2007 status mount Kelud scaled back to normal activity.