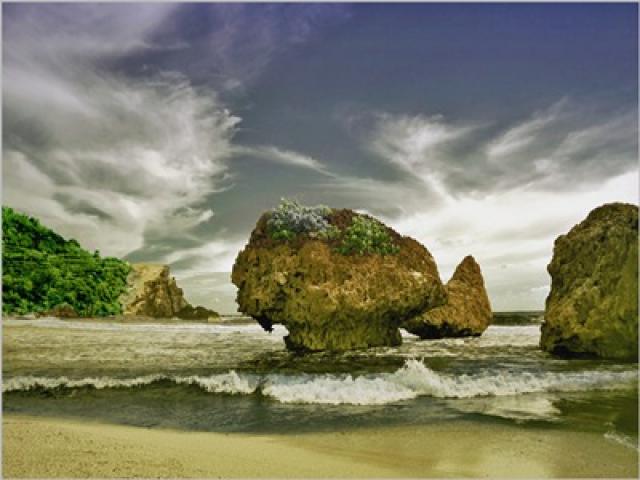 Siung is a white sand beach and located in Gunungkidul district, about 2 hours from Yogyakarta. The advantage of this is the beauty of beach Siung coral stone. Beautiful large rocks and often found on the beach cloves, which is on the west side and east side of the beach. The coral reefs are the basis for the naming of the beach, witness the triumph of the coastal areas in the past, and the charm that makes well known of the beaches.

The coastal region is a history of triumph in the past time. It has become one of the trade centers in the region with the presence of a market Gunungkidul named Winangun, which is home and Nyai Podi wife of courtiers of Yogyakarta and Surakarta palaces.

From 1989 until now, the cloves coast known as the cliffs and beaches have become feasible for rock climbing facility and not be surprised if in 1990 had held the race Asian Climbing Gathering. The waves were not too big on the waterfront, it is no wonder if the tourists will enjoy the beauty of the beach and surrounded by swirling in beautiful white sand.

There are 250 climbing routes in Siung that provide choice for sports fans rock climbing. The climbing lane may still be added, with the rule that the existing path with the permission of the manufacturer's previous path. Many people have done the climbing routes on the side beach.

Facilities Siung beach is a very supportive rock climbing, camping ground on the east coast. In this place, the tents can be set up and the fire set to spend the night. Terms of use just one, that does not damage the environment and disturbing turtle habitat. As noted on the signboard, there is a camping ground that can be used by a visitor to stay overnight.